A crash course into the gamer´s universe

There´s no way back anymore – the adventure has truly begun now. The artistic teams of PlayOn!-partners have started their journey towards the first PlayOn!-productions, that will premiere in the 2020/21 season all around Europe. As the first production focuses on the gamefication and interactive storytelling, the Budapest-meeting was dedicated for speeches and discussion sessions by and with experts of the gaming field.

An extra bonus was, that the sessions took place in the Central European University, a symbol of free thought, liberal values and innovation. 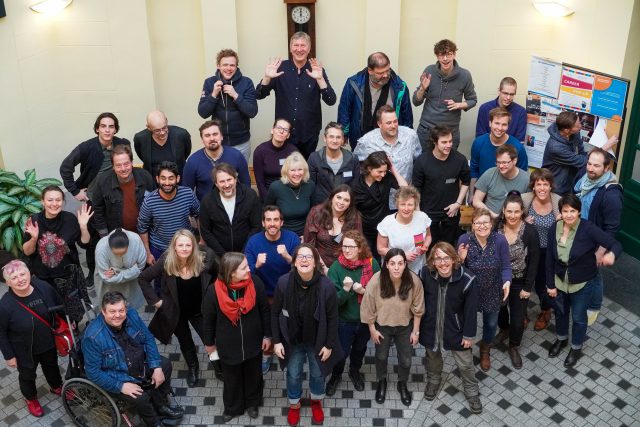 Because the theatres came with the first rough concepts of their production, the goal of the meeting was to inspire the participants and give them fresh perspectives for their visions.

For best-practice-examples three performance groups were introduced: Emese Bodolay from Anna Kpok (DE), Rachel Briscoe from fanSHEN (UK) and Alexander Benke from Das Planetenparty Prinzip (AT) gave an exciting overview, how their theatre groups have dived into the ocean of web, games and interactivity and found interesting links between these worlds.

Professor Tibor Dessewffy from the Etövös Lorand University of Sciences (HU) explained the newest trends and possible next steps in the development of the web and artificial intelligence.

As important as the creative exchange between the PlayOn!-partners in Budapest, was the possibility to meet so many experts of the digital sector. Every theatre brought an expert from their country and together with the top researchers from University of York and Theater Academy of Dortmund an amazing group of experts with different backgrounds and interest was assembled. Two days of intensive talks between the theatre practitioners and the experts brought forth a multitude of new ideas and possibilities for the productions. From the talks rose an important and more general realization: the goal of the first production (and of PlayOn! in general) is not to “turn” theatre into a computer game or a TV-surrogate, but to explore the quite unknown space between performing arts, computer games and digitality. The current world crisis and global lock-down shows us, how important this space can be not just for theatres, but for the continuity of international creative exchange and the involvement of society.

Now, as the crisis continues, the theatre practitioners have enough time to reflect on the ideas they got from Budapest-meeting and dig even deeper into the digital rabbit hole.

We've just launched a brand new WordPress theme for science and laboratory testing Novalab and it's on sale for $39… https://t.co/ATXRtfEgXK